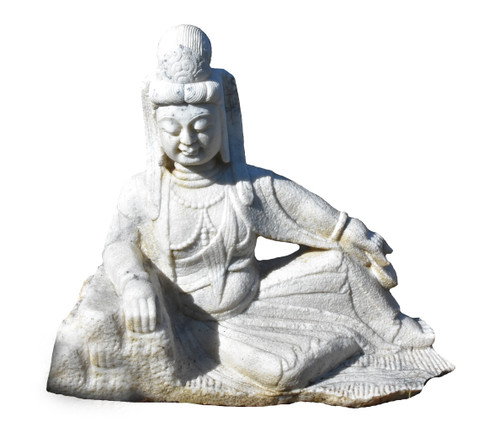 A beautiful, hand carved, solid white marble statue of Bodhisattva Kwan Yin Avalokiteshara, the Water Moon Goddess of Great Compassion. The sublimely carved face retains traces of the Tang style, seen in the full cheeks and long pendulous ear lobes. Seated in maharajalilasana atop a solid base, the left arm resting on the raised knee, wearing long robes opening at the bare chest revealing a beaded necklace, the serene face with a benevolent expression, the hair gathered into a high chignon and crowned with an elaborate headdress with ribbons draping over shoulders. The carver has skillfully captured the serenity and warmth of Avalokiteshvara, who is depicted as an approachable female figure, adorned with worldly accessories, to emphasize her non-ethereal status. As it was believed that anyone who recited her name during times of distress would be rescued by her, she is the most worshiped deity in Buddhism and has therefore been especially honored in sculptural form.

Stone Kwan Yin as a Teacher